WE ARE MOVING STORIES INTERVIEW 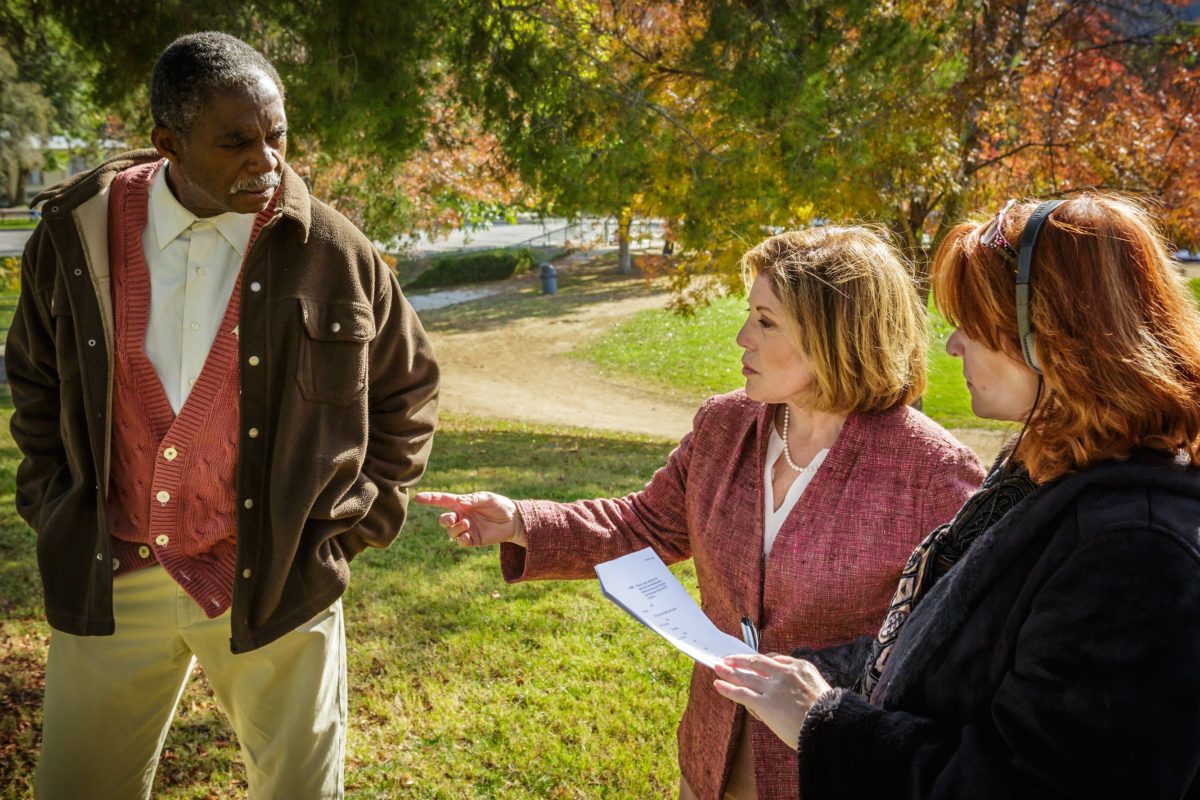 A bi-racial couple who were sweethearts in the sixties are separated by war and social pressures. Anne goes to her high school reunion with hopes of rekindling the romance with Michael, a war hero suffering from PTSD and Alzheimers, who is the love of her life.

Congratulations! Why did you make your film?

It touched my heart that the character Anne had the courage to go back to reconnect with her one true love so many years after they were high school sweethearts. The story affected me since I had a sweetheart I wanted to find but never could. I fell in love with the characters and thought the story was very moving. Michael was a war hero suffering from PTSD and Alzheimers and I wanted to address those important topics.

Imagine I’m a member of the audience. Why should I watch this film?

It is a beautiful very moving film that anyone can be touched by. It stirs the heart and is very real.

How do personal and universal themes work in your film?

It is a bi-racial love story. They were separated by social pressures and misunderstandings. There is also the truth of what happens to so many who are in the military and were in the military is important to bring to light. I think it is important to take a risk in life not knowing what the outcome will be. It is a love story about older people and that is not often told but pertinent to share. 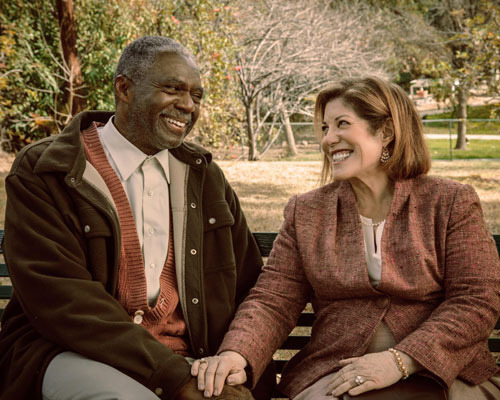 Come Away With Me – Michael and Anne share loving memories.

How have the script and film evolved over the course of their development and production?

The script was adapted from a short play called A Couple Of Horses Asses. I had done the play at the Actors Studio and thought it would be a very important film. I was so very touched by it and felt so connected to the character. I opened it up and changed it for a deeper interpretation. It was a very exciting process. It was originally not written for a bi-racial couple but I had made it more personal with that choice and more meaningful. I knew that Charlie Robinson was the right choice. We knew each other from the Actors Studio and have always liked and respected each other’s work. I sent him the script and he loved it and we were excited to work together. We had a wonderful time and I loved directing him…

What type of feedback have you received so far?

The feedback has been incredible. So many people came to me and were moved to tears by the subject matter and performances. Men and women. I was so happy that it resonated with so many. People have appreciated the cinematography, by the very talented Polly Morgan. The reality of the story and how it was told and unfolded is something that I received wonderful feedback on. The acting was well appreciated and received such wonderful recognition. The film is enjoying a very fruitful festival run, garnishing many awards, for the film, directing, and acting.

Has the feedback surprised or challenged your point of view?

It has not surprised me. I was fortunate to make the very film I wanted to so that people could relate to it and that is what happened.

The reality of what life can surprise you with is throughout the film. That Anne has the guts to go back to be with the love of her life is a statement of strength because you don’t know what is going to happen…Then life happens and it is not a Hollywood ending. It is real life! The audience liked that. 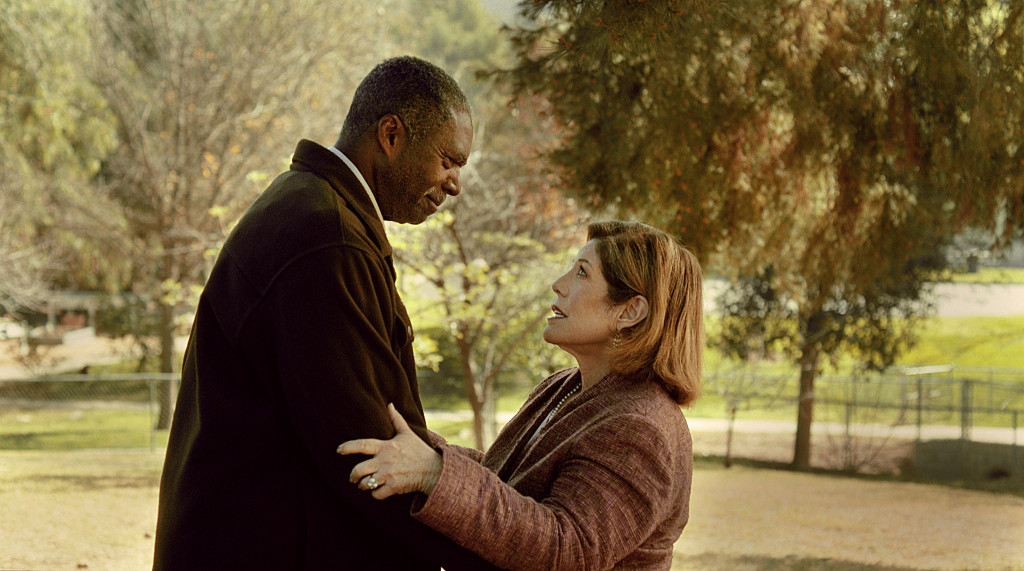 Come Away With Me – Michael and Anne dance to their High School love song.

What are you looking to achieve by having your film more visible on www.wearemovingstories.com?

I think the film deserves a wider audience. The subject matter is very important and real and needs to be shared. The people in the military suffer in ways others don’t experience and really know about. I would also appreciate people knowing me and what kind of filmmaker I am.

Who do you need to come on board (producers, sales agents, buyers, distributors, film festival directors, journalists) to amplify this film’s message?

It is the right time to talk to buyers, producers,sales agents and distributors.

What type of impact and/or reception would you like this film to have?

I would like it to affect people in the way that it gives them courage to go after whatever it is they know they want. There is no guarantee, but at least you went after it and no regrets. I also want to show that love and romance happens at all ages and stages for all people, not just the young.

What’s a key question that will help spark a debate or begin a conversation about this film?

One question would be is it worth taking the risk and going back and trying to re-connect with a love from your past who is still in your heart? There are no guarantees. Why won’t the government do more for the veterans? 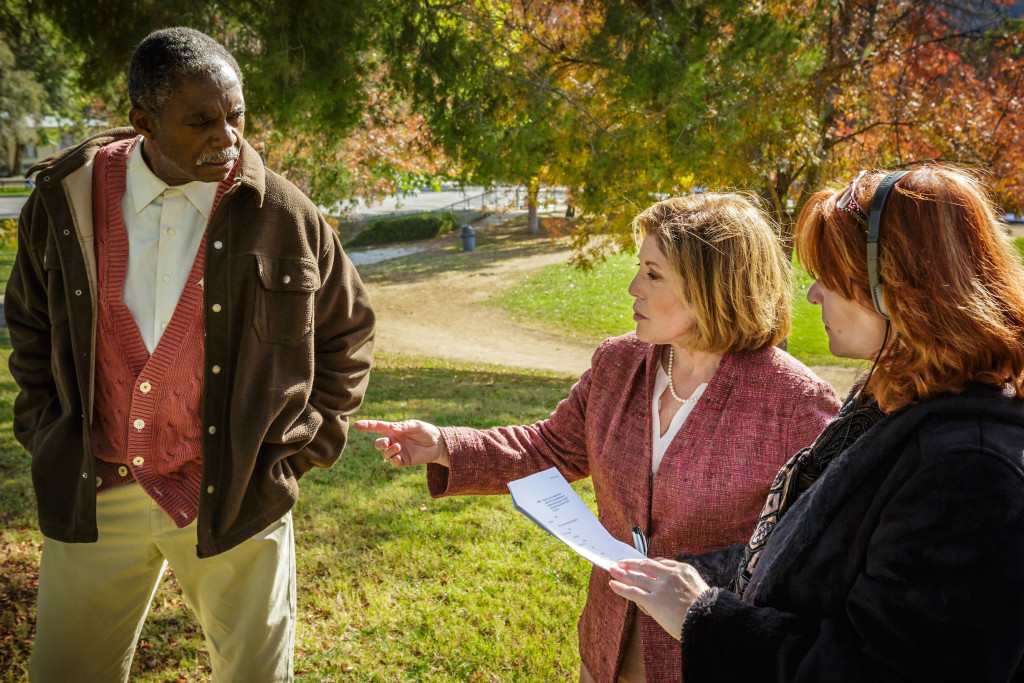 Come Away With Me – Ellen Gerstein directing Charlie Robinson.

This story really affected me. The character, Anne, was so brave to take a risk after all those years to find her love with the wish of continuing their relationship. Anne gave me the courage to try to find my one true love from so many years ago but to no avail. But at least I tried.

What are the key creatives developing or working on now?

I developed a half hour dramedy series called The Adventures of Ronald and Edgar, which was adapted from another film I did called Waiting For Ronald. The show is on the lines of The Odd Couple, just a little odder. It is about two men with developmental disabilities who finally leave the Belmont Center for Disabilities and take on the world! I have the one sheet, sizzle reel and pilot and bible. I am also creating a webisode called My Psychotherapy Comeback Tour. I am also writing a mockumentary called, Has Anybody Seen Jeannie Sebel?